How the Fox Valley Region Came to Be

In the late 1980s a core group of Porsche enthusiasts began meeting at a pub popular area of downtown Appleton referred to as “Between the Locks.” Over beer, salsa, and chips, this gathering of Porschephiles strategized how they were going to make the FVR happen. They knew they needed 25 members at minimum to get a charter from PCA. In order to meet that challenge, they worked hard at putting PCA membership fliers on windshields of any Porsches they saw parked anywhere in the Fox Valley. They further enhanced their search for members by attending cars shows. Once they met that criteria, the initial application to the Porsche Club of America to create the Fox Valley Region was submitted on September 19, 1989, by Matthew Safranski of Menasha, who went on to become the region’s first President. In order to accomplish this, some territory was surrendered by both the Milwaukee and Central Wisconsin regions. At the time of our charter on June 23, 1990 (although some documents state July 23, 1990) we were part of Zone 10 and consisted of the counties of: Waupaca, Brown, Manitowoc, Oconto, Outagamie, Calumet, Marinette, Door, Kewaunee, and Winnebago. There was some discussion about Fond du Lac county and perhaps dividing it into north and south, but the final conclusion by PCA was that Fond du Lac would remain with the Milwaukee region.

On June 14, 1999, our region added surrendered territory from the Central Wisconsin region, and other “unassigned” counties which included: Florence, Forest, Langlade, Menominee, and Shawano; all from Wisconsin. The “unassigned” territory from Upper Michigan included the counties of: Keweenaw, Baraga, Alger, Houghton, Gogebic, Menominee, Marquette, Schoolcraft, Ontonagon, Dickinson, Iron, and Delta. Our region was also re-assigned to Zone 4.

Our first club officers were: Matthew Safranski as President, Dave Hoem (Oshkosh) as Vice-President, Mark Wallenfang (Appleton) as Secretary, and Tom Krysiak (Menasha) as Treasurer. The roster indicates there were 28 registered members.

One of the first events of the club was a car show on the Friday night before Octoberfest in Appleton. The FVR was probably the first car club represented in a show that is now quite large and with rules of the age of car that is allowed to show. Our group created a “Porsche Coral” that cool fall night by taking over the intersection of College and Superior Street, with most of the Porsches in the area in the south side of Superior Street. There was a showing of 39 Porsches. At that time, that was a lot of Porsche in one place for Appleton! There were many curious on-lookers and pulled in a few more members.  From there FVR kept growing. A newsletter was started during the first year and helped keep members active in club events, some small, some much larger. The best event of those early years was the Door County Fall Tour which always coincided with Sister Bay’s Fall Fest. Porsches from the FVR were always in the parade. The club’s members took part in the Fall Fest events (eating and beverage consumption!) before they would go off touring Door County and making various stops at key tourist places.

One funny story about the parade in Sister Bay. The first year of being in the parade, the cars needed to line up along a road just off the parade route. There were parade coordinators everywhere with walkie talkies. When members pulled up to the area where they thought we were supposed to be, the person asked on her talkie, “Where do you want the Porsches to line up?” The person on the other end said, “The horses? What horses?” She answered, “No, no no! The PORSCHES!” “Oh.” But after that first year, they knew when the Porsches came to town.

The above is a brief part of our earliest history.  We are creating new history every month.  Please peruse our site and contact the president or the membership chairperson if you have further questions or would like to join us. We are always seeking others who share our passion for Porsche! 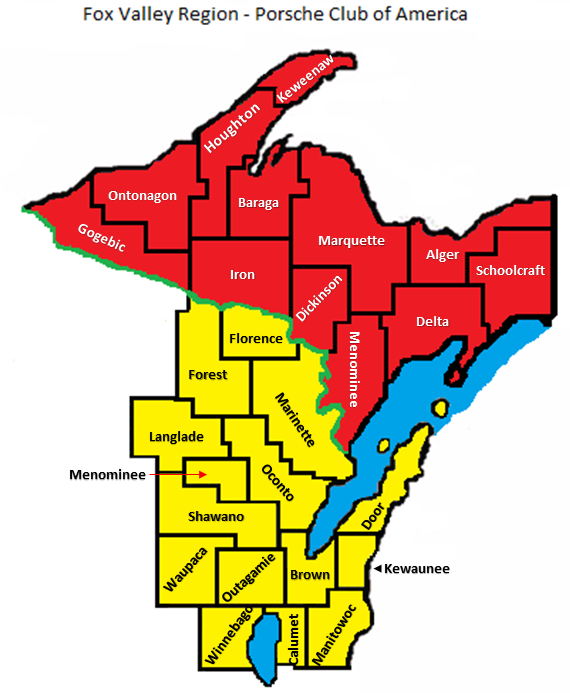